Dara Wier is the author of numerous collections of poetry, including In the Still of the Night (Wave Books, 2017), You Good Thing (Wave Books, 2013), Selected Poems (Wave Books, 2009), Remnants of Hannah (Wave Books, 2006), Reverse Rapture (Verse Press, 2005, 2006 SFSU Poetry Center Book Award), Hat On a Pond (Verse Press, 2002), and Voyages in English (Carnegie Mellon, 2001). Also among her works are the limited editions (X In Fix) in Rain Taxi’s Brainstorm Series, Fly on the Wall (Oat City Press), and The Lost Epic, co-written with James Tate (Waiting for Godot Books, 1999).  Her writing has been supported by The Lannan Foundation, The Guggenheim Foundation, Massachusetts Cultural Council, National Endowment for the Arts and The American Poetry Review. In 2005 she held the Rubin Distinguished Chair at Hollins University in Roanoke, Virginia. 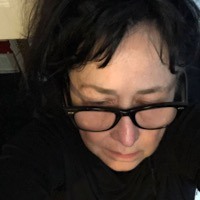 No Way to Be