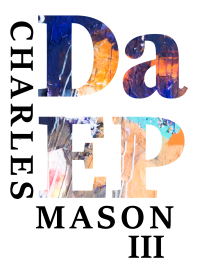 Charles Mason III (based in Baltimore, MD) received his AA in General Studies from the Community College of Baltimore County, 2010, BFA in Graphic Design from the University of Maryland Baltimore County, 2014, and his Master of Fine Arts in Studio Art from the Pennsylvania Academy of the Fine Arts, 2019. He has curated several shows in Baltimore and Philadelphia as well as had solo shows in Baltimore, MD at Maryland Art Place, 2016, and Philadelphia, PA, at Spillway Collective, 2019. He has participated in group exhibitions at Hudson Valley MOCA, Peekskill, NY, the Woodmere Art Museum, Philadelphia, PA, Radical Reading Room, The Studio Museum in Harlem, Harlem, NY, Breaching the Margins, Urban Institute for Contemporary Art, Grand Rapids, MI, and Proximity, Anna Zorina Gallery, New York, New York, to name a few. His work has been included in articles in both the Baltimore Sun and BMORE Art respectively. He has work in the permanent collection of the James E. Lewis Museum of Art, Baltimore, MD, and he is also a recipient of Maurice Freed Memorial Prize.