What colors mark our lives?
Today I spun a future in vivid juniper
green, in melancholic rose, in hushed gold
touched dawn, and deep ambrosia red—
the shade of nightfall over the Sinopah.

The names of each painted strand were chosen
by someone else, but like a child learning to speak
or a visitor in a foreign language, I blended the sounds
of their names together. Each hue was a mirage—

a trick of light, a fascination. Each fired
an unpredictable rhythm of cones and cylinders
in the eye. If color was biological, automatic,
mechanical, what sense could the eye hold?

What meaning eluded the tongue?
The name of each color wrapped itself
around filaments of silk and wool,
but each strand escaped embrace

like some possible love too hard to grasp,
like the wooden umbrella that danced
in the air much faster than the gears
could pull it, turning threads into a tarantella,

a glide of tambourine, a flash of insight,
an arm raised high, a ribbon flying
forward, a human form almost divined
then lost in the commotion.

The yarns spoke no truths,
they only provided a future.
On the unvarnished wood,
their mad dance left behind just

a few scraps of juniper mint, gold
like the dawn on her cheek, a quiet
red blossom, and the nightfall
over the Sinopah. The moments mixed

like velveteen where they had been
forgotten. Strings ran parallel, intersected,
spiraled out. They made an uncommon nest,
which I placed in my palms and embodied

for a moment the hues and rhythms
of their enchantment. The colors startled
in their connection and dissolution.
They wove an entire cosmos in my hands.

Since I’ve been gone, I’ve had this theory
that relatives, friends, even great loves
continue to live wonderful, peculiar,

cinematic lives at a great distance,
even if I couldn’t see them everyday,
every year, or even once again—

This is what makes distance possible:
to live alongside but separate.

They would live parallel to me in India
and Singapore and Germany, in Japan
and England, in Australia,

down the West Coast and the East—
And every few years, we’d meet
and be surprised at how a nephew

seemed taller, a beloved cousin
a little bit more plump, and a great aunt,
quirky but a little slower.

This is what made distance possible,
but all those years ago, it was hard
to watch Nani’s long hair grow silver,

the light of her smile softer,
her eyes just a bit more tired.

I think of her often when gliding
past cumulus clouds that turn
into waterfalls and castles
over new planets like Reykjavík.

She was the first woman I knew
driven by words and wanderlust.

That is to say, it feels mystical
the way we love and exist
in separate times, that continents

and oceans, satellites
and telephone wires hide the interplay
between night and day,

that affection and touch
are our waking shadows, that this
is what makes distance possible.

Words and wanderlust
are his day and my night—

What good is distance
when you’re entangled
for good?

Ensnared by gestures and words
and the promises of touch
that reverberate and rewrite the body.

and rejoicing at leisure, rejoicing
at having the time to watch and read
and write and remain remote.

But even for the closet voyeur,
who steers the journey—the pilot
or your eyes? When we see the hurt
distance causes, is it not the same?

In waking sleep, in the dawn’s glow
over Reykjavík, the first words that come
to mind are: glacial planes, mountain fog,
hot-spring skies.

The air is occupied by a blue so true,
so finite and impossible to break,
it could only belong to Reykjavík

and to one devastating morning
in September nearly twenty years go.

and cotton. The ground is black-green:
a lava-rock speckled brown.
The tarmac glows:

we glide between
dotted aurora borealis lights
and parallel lines.

The first time I knew we had made it to Paris, was when, after watching the New Year’s fireworks illuminate the evening sky, we returned to our room, and I slipped into the bath and watched the water magnify the light against the blue-green tiles. The faucet rushed on as I settled in, and my fingers, sliding to turn it, shook off small drops. Each fell back like a diamond. The water around me glittered and swayed, catching the crisscrossed shadows and luminosity of the overhead lights. The room was warm and silent. And for a quiet moment, the water falling from my fingertips felt like an unasked wish had been granted.

The hotel must have been made during the fin-de-siècle, and was somewhere on the edge of the 17th and 8th of Paris’s snail-like arrondissements. It was a place that felt sleepily suburban. The neighborhood was quiet and full of immigrants and döner-kebab shops and young families pushing strollers passed stores that had closed earlier that night.

Our hotel was outside of the city’s charmed inner life. You had to cross a bridge to cross a bridge to get to a place where you could hear the murmurs of dinnertime conversation. And the clinking of glass and cutlery as the bateaux mouches radiated down the Seine at night. It was an even longer walk to all those celebrated icons of tourism. A stroll down the Champs Élysées or an amateur photoshoot under la Tour Eiffel seemed miles away.

But we hadn’t come to Paris to be tourists. We were here to peak at the storage rooms of the Musée Guimet to decipher if the Buddhist statuaries they had recently purchased were in fact authentic Gandharan art or just forgeries. You were here to read the ancient inscriptions and decipher their value. And I had come to the city to relearn a life of art, to figure out how one became just a poet.

It was my first time in France. When we left Boston, I was twenty-six going on twenty-seven. And when we arrived in Paris, I was shocked by how the air even felt lyrical that evening as the city shut down around us. It was mid-winter, and by the time we carried our suitcases up from the metro to the hotel, almost everything was closed around us for Saint-Sylvestre. We checked in, watched the clock’s hour-hand inch closer to midnight, and hurried to deposit our luggage in our slim and compact hotel room. It was a place where the bed hit against the wall, which bumped against the desk. There was just a small alcove for an electric coffee pot and a folding stand for one of our suitcases. The other remained on the floor as we darted out to get dinner before the lights of the remaining restaurants closed.

But a few blocks away were the open-air night marchés, and there we picked out a small round of gruyère and some light bread and strawberries for desert before the joyous crowds on the streets dispersed. Back in our room, we made a picnic on the bed and opened the porte-fenêtre into the courtyard below. Beyond the white-gauze drapes was a December night about to greet a New Year. Friends and families finished late-night dinners. Pre-war jazz played from the ivy-covered windows. Somewhere, around the corner a couple made love. They sounded nothing like the movies. A pair of men smoked over their balcony with drinks in hand.

A few minutes to midnight, we would run to the nearest bridge to watch the fireworks. From some remote corner of the Seine, as we kissed and embraced at midnight, I would think how funny it was that even gunpowder was first invented to celebrate art and joy. We had been together then for nearly two and a half years. And I was sure that on that bridge, under those fireworks that exploded like diamonds and decorated the night sky with streamers of flickering gold, orange, bronze, and blue, one of us would surely whisper to the other, marry me. 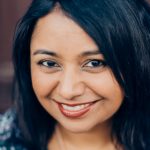 Rita Banerjee is the Director of the MFA in Writing & Publishing program at the Vermont College of Fine Arts, and Executive Creative Director of the Cambridge Writers’ Workshop. She is the author of several books.