I’ve known all my life that my father’s Uncle Joe was killed by his
wife.

It was almost a novelty story—a murder in the family!

At twelve or thirteen, I learned she was a serial killer—Joe the third
husband she poisoned with arsenic.

He was twenty-six when he died of kidney failure. A handsome, hero
pilot, back home safe from the war.

She brought him fresh juice every day in the hospital.

I was in my thirties when I found out Joe’s mother—my father’s
grandmother—my great grandmother—was “never the same.”

Joe was her favorite. Her life was ruined by grief.

This woman, my great grandmother, her name was Geneva. I had
forgotten.

I have a black & white photo of Geneva wearing pants, about to ride
in a bucket into Carlsbad Caverns.

When our lives overlapped, for five or six years, she seemed already
dead, still and silent.

I was forty when I learned there was no suspicion of murder until the
wife’s young daughter started getting sick too. A life insurance scam.

They exhumed my father’s uncle, and Joe’s older brother—my
father’s father—my grandfather—had to identify the body.

We were in a restaurant when my father told me this.

They say “never forget,” but you can’t remember things you haven’t
experienced.

My best friend gave me a kimono with such deep creases that they
never came out in the wash, no matter how many times I washed it.

It makes me think of a study I read about once that said butterflies
“remember” being caterpillars.

I wonder what I don’t know I remember, and how much room it’s
taking, on the long, boring drive across New Mexico.

It’s a good kind of boring—the miles of dead nothing, and then a
herd of tiny antelopes.

They make me think of Auden’s reindeer, moving silently and very fast
in their altogether elsewhere.

The poem is not here.

There is the past of the poem, a post-war poem, and the past in the
poem, which is about the fall of Rome, which I never remember.

Maybe now I will remember. 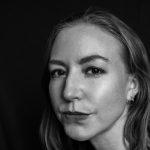 Elisa Gabbert is the author of five collections of poetry, essays, and criticism: The Unreality of Memory & Other Essays; The Word Pretty; L’Heure Bleue, or the Judy Poems; The Self Unstable; and The French Exit.