The story is always some variation of this:

The woman was a writer’s muse

The woman was an artist’s model

She was also his domestic servant

She managed his career capably

(She was an artist in her own right)

She was his lover, or his mistress, or his wife, or

She was a financial dependent the artist had sex with

She has no children

She has a husband who died

She is a charwoman

She is a barmaid

The artist fell in love with her when she was 10

The artist fell in love with her when she was 12

The artist fell in love with her when she was 14, with ribbons still hanging down her back

The artist was disgusted by her “person”

Upon first meeting her, the art critic wrote “she gave me her hand, as a good dog gives its paw”

She died in a nursing home at the age of 27

She died in an insane asylum

She “received electric shock treatments, during which she broke several bones after falling off the operating table”

He found her “much deteriorated”

Her likeness slicks calendars and postcards and living room prints

In paint an exaggerated form of ideal beauty

I was born into a time when women were almost liberated

I was born into a time

We put chemicals on our hair to make it curl

Chemicals on our hair to make it straight

With metal clamps or tongs we made it crimp, or roll, or flat

Imagine a doll that has a person inside it

She did not wear makeup on or off the job and said that “wearing it would conflict with her self-image.” She found the makeup requirement offensive and saw it as further evidence that Harrah’s “‘sells’ and exploits its women employees.” She “felt very degraded and very demeaned,” claiming that the makeup requirement “prohibited [her] from doing [her] job” because “[i]t affected [her] self-dignity” and “took away [her] credibility as an individual and as a person.”

The heading of the Harvard Law Review article reads
TITLE VII — GENDER DISCRIMINATION — NINTH CIRCUIT HOLDS THAT WOMEN CAN BE FIRED FOR REFUSING TO WEAR MAKEUP.

The dawn of the 21st century

I was born into a time

Imagine a doll that has a person inside it

I dress the doll thusly

If my doll is very pretty

If my doll pleases

What does a doll create?

A doll a delusion an invisible accomplishment

How to be more gentle    more genteel

A doll proffers her hand when introduced to an accomplished man

He squeezes the tips of her fingers, oddly

It is a power that turns and collapses

A doll is a stupid metaphor

A woman cannot climb from the skin of a doll

“I felt very degraded and demeaned”

“It affected my self-dignity”

In these paintings the women have thick strong bodies, like a column

Their skin is like an inanimate material: marble, bronze, jet

Her hair, a river of fire

Her hair, a cloud of smoke

Paintings of women with no women inside them

Takes up the mantle of the rage of revenge

Circe circled by lions who used to be men

The rich wife daubs up seepages of rage

The woman who was a queen proffers now a wilted flower

The rich wife closes down her mind

Daubs away the remains of her own green thoughts

A melodrama of rage washes away with water

The rich wife wants to protect the women who

The men’s accomplished paintings shimmer from postcards and gallery walls

The women’s less accomplished paintings are displayed in special shows

(The galleries echo with the women’s missing works)

(The masterpieces they never made)

(With techniques they were never trained in)

(Perfected with time they never had) 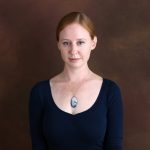