THE WONDER OF HAVING LIVED HERE A LONG TIME

Whatever happened to joke shops? I remember two of them
In downtown San Diego, one on a corner on Broadway
Not far from the library, that specialized in off-color signs,
Like a guy sheepishly imploring “We don’t swim in your toilet,
Please don’t pee in our pool,” or a tall Texan proclaiming
“The high balls are on me.” The other was on F Street,
Next door to the Hollywood Burlesque’s marquee celebrating
Tempest Storm, with a sign in its window offering fifteen dollars
For 1945 pennies, which I started looking for until it hit me
1945 meant 1,945. Anyway, they’re both gone now,

While here I am, inhabiting a moment that supposedly was buried
In those moments I spent looking through their windows sixty years ago,
Although I don’t believe it. I’m supposed to be a part of nature too,
As subject to its principles as particles and stars. I know time isn’t real
And everything that happens happened thirteen billion years ago,
When all of this somehow “occurred.” I realize these things,
And yet deep down I think they can’t be true: I wasn’t even real then
And in a while I won’t be real anymore, like the joke shops and Tempest Storm
As things turn into time and disappear (though she’s still here). And while
That might be just the way things seem, it’s the way they seem to me.

“It feels like such a miracle, this life”—I wrote that in a poem
Six years ago and I repeat it now. I’ve no idea what other people feel
As they get old, but I feel nothing but amazement, not at what I am,
Which is commonplace and ordinary, but that I am and have a life at all,
The private one of these appearances beyond the reach of physics.
Though they take the form of time, they’re really nothing but myself,
The pages of a narrative that led the way from childhood to here
That no one gets to read unless he wants to, pausing to look in the window
Of the joke shop on Broadway on the way to the library, or the one on F Street
Next door to the Hollywood Burlesque. Not to mention Tempest Storm.

I saw Elmer Gantry in 1960, and was so bowled over by it
I had to read the book. It drew me down the path of modern fiction
That counterbalanced all the math and physics, and though Sinclair Lewis
Isn’t what he used to be, he led the way to Faulkner and Fitzgerald,
Hemingway, Woolf, Dostoevsky, Joyce and all those sentences,
Beginning with the first one in the book: “Elmer Gantry was drunk.”
For despite the fragmentation and uncertainty, the temporal dislocations
And excursions into consciousness, what modernism meant to me
Was language, and the way a sentence could take a transitory
Moment and then make it real. Poetry would come later, but for me
The soul of poetry would always be that underlying prose.

It stayed with me while everything started turning:
High school into college, physics to philosophy, marriage
And Milwaukee, fatherhood, divorce, the years of settled solitude
And the second happiness of marriage, all turning into poetry,
For that’s what life becomes if you can get it into words.
I saw Elmer Gantry again this afternoon, at Film Forum in New York,
And after almost sixty years and all those books it still holds up.
Burt Lancaster—hated, he claims, by Harvardism, Yaleism and Princetonism—
Still celebrates the majesty of love, “the morning and the evening star,”
Until he runs afoul of Lulu Bains, falls temporarily from grace,
And Sister Sharon Falconer, the word of God incarnate, goes up in flames.

I had dinner afterwards with Willard Spiegelman at Gene’s.
We talked poetry of course, from Howard Moss (who ate there too)
To Amy Clampitt, and I explained my old, unlikely debt to Sinclair Lewis,
Which I sensed he wasn’t buying, though this poem is witness to it.
And tonight (see how it goes from tense to tense and day to day)
I’m having drinks again at Gene’s and dinner with Doug Crase.
We talked about how poetry goes from being something that you read
That other people write, to being part of what you really are.
For me it was the sense that poems are a way to understand the world
As real as math and physics, and as true—something I still believe
That now seems quaint—a sense that came to me from books.


And now I’m back. Going to New York can feel like rereading,
Sometimes even literally—as when Elevator Repair Service reread Gatsby
And recounted Benjy’s tale. It makes the world feel possible again,
The way it did before I settled into it and made it second nature.
It makes me feel that literature and life both share a sense of destiny,
Floating down a stream of consciousness made up of words so mixed up
With the world there isn’t any difference. I realize these are fantasies,
Not fairy tales of once upon a time, but narratives that sound like real life
And take me back to where I started—borne back ceaselessly
Into a past of perfect sentences, where Caddie smelled like leaves,
Ben’s hoarse agony roared about them, Robert Cohn was once middleweight
Boxing champion of Princeton, and Elmer Gantry was drunk. 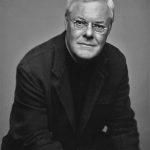