339th Morning of my Easy Quarantine

This morning when I woke up I had nothing,
or I felt I had nothing, but I had something—
I had a hangover, a lot of little somethings
like neck-ticks dispersed throughout my body,
and some gravitons too, which have risen into my flesh
and are pulling me down toward the earth—eventually into it.
I know someone important said there was not any nothing,
that a vacuum does not exist,
but when I read the arguments for and against
I could not tell which was for and which against.
There is a mush on the pond where last night’s snow and ice are melting,
there is no glimmer, but a grey blur,
a little yellow-blue, a little yellow-pink—like mother of pearl
with no glaze, no gleam, just some smudge, some scrawl,
rifts opening in the slush.
If I were closer to it, I could hear it,
murmur of departure from frozenness,
sizzle of stacks of melt.
You might have thought that I was going to yodel something about my interest in dulling my perceptions,
something about drying up the rich breasts of my description, but I am not—
though I would be talking about myself, you are used to that from me.
My passport has been the Chardonnay label on the bottle,
its contents have been the loop-de-loop of my fun-fair ride.
I used to think I would never throw myself away.
When I stare at the slope of snow long enough
and close my eyes, inside them I see a blazing green sphere.
When I open them again I see bright thaw-water rippling over the dam, I see
nothing false, nothing valueless.

This morning, shapely black mouse turds around a forgotten sprung trap,
and little black mounds of blood, and a spent match,
which turned out to be
a mouse paw and foreleg
gnawed off to free the rest of the mouse,
the tiny nails curved like multiplication in algebra.
My house has mice; the night above a summer lawn has fireflies; seeded rye, seeds;
I feed the mice to the crows from a piece of tinfoil on the carriage stone,
a series of upstate tin-footed mice,
a mouse farm. I would look for a long
time, as a child, at the picture of the hole
Stuart Little had gone into, leaving his cane outside.
In English books, boys were caned.
In my mother’s house, it was a whiskered hairbrush,
its tortoise stripes beautiful as a honeybee’s fur.
The first time—confirmed by independent news sources—
I was 9 months old, no brush yet, just the flat palm.
And my mother was a Stuart, she was born to it—
maenad, who squeezed me out.
This morning, as a mouse farmer, I thought of Carl,
how he felt about his cows and bulls, whom he would feed, breed, kill, sell, castrate, and help
give birth,
sometimes his arm inside her up to the shoulder.
She to whom he was guardian.
And I thought about his father, who, as a child,
would hide in the woods with the cow, when the Gentiles came killing. 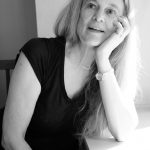 Sharon Olds is the author of over thirteen books of poetry. Her most recent poetry collection is Arias. Her next book, Balladz, is forthcoming in 2022. She lives in New York City.