A STORY ABOUT THE NATURE OF TIME

A long time in the past, a door opens. Four young men carry a gurney with a living body on it out of a building. The body is wrapped in a sheet, and bleeds onto a disposable mat. The body’s fingers hold the mat in place. Its face looks toward the sky, where there is no rain, only an empty eye.

The men step down the stairs like large show horses, in unison. The oil they emit from their bodies dissipates into the air in a metallic spritz. They put the body into a vehicle, then take it to an emergency room, where it is scraped. Its liquids are low like a receding tide. Before it goes under, it feels its death drive beat inside it like a live fetus.

The body wakes up, receives a bag of blood, eats iron. The iron travels through the body like a benevolent knight. The body doesn’t even have to acknowledge it’s being repaired.

Leaning on the power of the iron, the body can rise like a shitty tower. The body climbs a StairMaster at the gym, rising above everyone else.

The body has dreams, even now.

It was in a coffee shop called Hungry Ghost

The paperwork consisted of two certificates

And when the funeral director handed them to us to sign

Her face was grim with practiced empathy

Hungry Ghost is a term from Buddhism

For beings who are driven by need

And unlike regular ghosts

Or in their lifetime did an evil deed

As much as I don’t understand

Why we chose to meet the funeral director there

She had offered to bring the certificates to our apartment

But my immediate reaction was to say no

That I didn’t want her inside my home

Though I would later allow her in

Hungry Ghost was full of people on laptops

Doing the ordinary work of their lives

Or editing an endless document

All the tables were taken

So we sat in a row of three on a bench

A large painting of a bull behind us on the wall

The funeral director, my husband, and me

I ordered a small caffeine-free tea

I needed to order something

To pretend we were there

For a normal reason

On this day in October

Just days after my daughter

Came out of me not breathing

I sat behind the barrier of my husband

So that I could hide my face if I needed to

And he covered me with his huge emotional wingspan

Even though he was also feeling devastation

And the queen’s corpse

Which was my corpse

Rattled with the force of my voice

I gave the paper back

And held my undrunk tea

In my freezing hands and felt its heat

Radiate into the little calcium of my bones

I had been to Hungry Ghost the day before the birth

I had been feeling good

The contractions were occasional

I sat with my longtime friend

Who used to tell me

When we were kids

That I was too secretive

That I should feel okay about letting people in

When I’m having a hard time

That I should let people care about me

The way that I care about them

She had the barista take a picture of us

While she pointed at my belly

I saw the photo only once

​​But I remember exactly

The way it looked

The way I looked in it

Dear friend I am having

Once there was a sunflower on a fire escape across from my own. It grew slowly, as plants do, from a small pot. I did not notice it until it was huge, its big head on its small stalk, wobbling hilariously in the wind. The surprise of seeing the sunflower made me laugh. It’s so big, I kept saying. How did I not notice.

I have a blind spot. I now know this.

In the maternity ward, there was an emblem on our door of a calla lily, the flower of funerals. The emblem was there to warn anyone entering about the atmosphere of the room. All the other rooms in the ward received sunflower emblems.

Behind my funeral door, so much of my blood was gone that I felt completely dried of everything. But urine still leaked from my catheter, a muted yellow, my body ejecting more than I thought it was capable of ejecting.

In the lily room, they gave me the blood of a stranger, and I took it and let it rehydrate my body like a plant being watered.

Sunflowers are like a total eclipse. They are dark in the middle, with a corona that extends.

During an eclipse, animals and plants go to sleep. They start to wind down, tucking their legs under their bodies, closing their leaves. Bats begin hunting. Mosquitoes start biting. When the eclipse is over, they experience stress because what happened is not what they expected.

I realize now that you came from the eclipse. You were sucked back into it when it was over, when our time together came to an end. You were beautiful and world-ending. You shocked me with your beauty, and I became so scared.

A blind spot burned into my retina. A permanent hole, like film chewed up by heat.

Sunflowers are sunny. Why wouldn’t that be.

Later at the grief group, each participant brought in a flower to create a big bouquet. We were sad people in a room, and the bouquet was for all our babies. I brought in the biggest flower, a sunflower. It had the tallest stalk. It had the biggest head as it glowed there, dark in the middle. 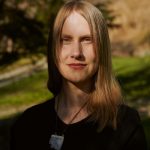 Niina Pollari is the author of the poetry collections Path of Totality (Soft Skull, 2022) andDead Horse (Birds LLC, 2015), as well as the co-author of the split chapbook Total Mood Killer (Tiger Bee Press, 2017).