Panicked disorientation in the predawn gray.

We steep the tea three times before throwing it away.

It is certain
every landscape vanishes into uncertainty.

It is impertinent
how therapeutic sunlight feels on your face.

The original purpose of a countdown was letting observers know when to cover their ears.

The worst thing I can think of is that as long as suffering gets worse in the future, the suffering of the past becomes instructive, even something one can be glad of having happened, since without its lessons the suffering to come would be even more painful, perhaps even unbearable; and yet, if suffering doesn’t get worse than it currently is, then the current and past suffering (or whenever suffering was at its climax) becomes comparatively pointless. If life is good and only gets better, then one would have been better off without having suffered beforehand, and one is doomed, it seems, to drag the negative fruit of that suffering endlessly forward, sullying the absence of suffering the future would otherwise be made of.

Every day you die a little bit, but up until the moment you’re done dying, you’re infinitely young.

Poetic language coalescing on extremities of feeling like frost on a window you wouldn’t otherwise realize floated between you and the world.

Grief doesn’t break your heart; it expands it. It breaks your brain; nature’s whispered gibberish is suddenly intimate.

May wisdom’s sweet resplendent light sweep the darkness and pain from the plain of your striving cognition.

May the cradle of nothingness hold the wilderness of you in its furious sway.

May you weep with the numinous delirium of those reborn who were born before. 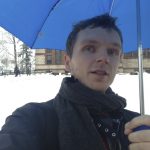 Mark Leidner’s most recent book is the short story collection Under the Sea (Tyrant Books, 2018), called “virtuosic” by the New York Times.