I get distracted by a post on zodiac signs
of America’s most known serial killers:

Our sensitivity leads us to homicide, our soft
power and listening eyes are perfect honey traps

You do not want to see the mass graves I’ve ideated
and my dearest friends are Twins, Virgins, and Centaurs

When we tea, it’s red all over–

I watch I May Destroy You
cringe at the drug and alcohol consumption
be like, too much, that’s too much
don’t take a drink from which you do not know from where it came
the intentions of all the hands that bring it to you
and why so many bumps, why again, maybe don’t mix, don’t mix
alcohol and don’t mix hallucinogenics with uppers—
all my compartments are slurring, perfect divides leaking
into each other, the peas are touching my fish, my fish
needs a whole plate for itself

I can’t stand a sex scene without a condom wrapper tearing
an arm reaching to the side table, all those gestures to move
the body safely into another body and I nearly threw a fit
reading a public service announcement at the bus stop:
Why is syphilis back?
Why the fuck is syphilis rising?
Why have infection rates increased among young adults?

Then this Black child, in Cuties, could be a younger version
of Michaela Coel, blowing up a pink used condom found
in some bushes, into a boob, like the 11-year-old she is
and I’m squealing with her friends, disgusted that this child
has learned to put random shit from the ground in or near
her mouth—even with the 5-second rule you know the fallen food
so the children must teach the child “That’s what people with AIDS use,”
and oh, this misleading simplification: lemmings following sheeples to the likes

and the panic my mother felt, jumping
up and down to compel the sperm to fall from her 13-year-old vagina
into the cotton catch of her panties, because this is Plan B—
dumb the Black child’s cries, she who looks terribly abandoned
in shame and fear, a silhouette sapling of pornographic womanhood
and from the literal lips of babes, she tells us, all us, “It’s not her fault
she don’t know what a condom is.” 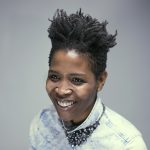 Arisa White is a Cave Canem fellow and an assistant professor of English and Creative Writing at Colby College. She is the co-editor of the anthology Home Is Where You Queer Your Heart and co-author of the middle-grade biography Biddy Mason Speaks Up.