For a few days, no sun. A scrim, a smoky gray light.
Cats paced in front of windows.
You dug a pit and lit a fire in the backyard,
and its smoke seemed invisible, swallowed
instantly by the atmosphere.
I thought mugs of soup would help.
I walked into the street, but there were no cars
and all the neighbors’ doors felt
double-bolted. Yes: that was a thing
you could feel, each door a back turned to us,
each the refusal of lips pressed shut.
The cellphone had only a single bar.
When I called my father, the phone
rang tantalizing for a moment
before flashing “dropped call.”
Not that I really wanted to speak with him.
We’re going to burn leaves, you said.
There was a pile in the corner of the yard,
downed branches, debris from the storm of ‘17
which had become a backyard fixture.
So I brought out folded beach chairs,
the aluminum kind with plastic strips crisscrossed
for the seat, and set them up.
Do you think things will get better, I asked.
You were kneeling by the pit, making a little pyramid
from twigs, all bedded round with leaves.
Beside you, a can of lighter fluid and the lighter
we keep in the kitchen drawer, along with candles
for a blackout. You didn’t answer, your attention
fixed on the fire. Better? I said again.
Soon you had a blaze going
and sat down in the chair beside me.
I was hoping you’d take my hand.

Lessons from the Pandemic

Bug chasers. It was a thing
back then: that the anxiety
over getting AIDS became
more unbearable than having it,
which, at least, came with
a community, the busyness
of illness, even a kind of back-
of-the-hand-on-the-forehead
glamor. There were parties
for catching it, everyone present
a willing participant, which
I imagined taking place on
the whitest sheets possible,
a surgical brightness as if insisting
the process cured something.
And now, decades later,
I think about it at the post office,
the temptation to grasp full on
to the metal slat of the door handle,
press my hand hard against it.
You may think that way, too:
may want to say the hell with it,
that we’ll all get it eventually.
You can wash your hand later.
Or, unthinking, let your palm
rise, as it always does, to cover
your mouth, a ruminative
gesture, as if you were imagining
the future or contemplating
the past. As if those
were different things.

There were degrees of addiction: attention spans,
each like a book of matches, all the match heads flaring at once
and then the whole thing curling into a carbon potato chip.
There was fresh snowfall and two boys in the yard

trying to write their names in it with pee. The boy named
Ben had an advantage: just three letters. And a tree, only one
in the whole woods behind the house, he could climb:
the limbs starting low, tapering up at rung-like intervals.

For a while, a ladder leaned against the house. It was suddenly
forty years later, and I was on it, my belly button level
with the top rung, the upper half of my body strangely untethered,
though gravity compelled it house-ward. Always keep,

my geriatric father had said, the ladder in front of you.
Was he being literal? There was reaching up with a scraper
for one good scrape, and a rain of paint chips into my hair.
On New Year’s once, in a friend’s basement, we made

the numbers of the ending year out of wooden blocks
with the plan to smash them at midnight: there was a seven
and a nine. Could there have been two sevens? His mother
was concerned that we were eating too much candy, which

of course we were. I’d made a piñata out of a balloon,
newspaper, and streamers. The piñata looked like a balloon
covered in newspaper and streamers. Come midnight,
that, too, got smashed. Last New Year’s eve: a party

with local guys, all of whom call themselves “bears.”
There was a hot tub and a buffet and a fireplace roaring.
I sat on the edge of it, introducing myself to whoever
passed by, which, over the course of three hours, was six

men, all of whom had husbands present. Had my parents
attended such parties? Heterosexual suburbanites who didn’t
form subcultures by identifying themselves with wild mammals—
surely they had. Some were at our house. I’d had to stay

upstairs, though beckoned downward by the glamor
of laughter. I miss the seventies though I do not
really remember them. I remember morning cartoons
and the wooden paneling in the sewing room which was

dyed blue. The smallest room in the house, it was there
we gathered, my parents and older brothers on the couch,
me on the floor. It was better on the floor. We used to watch
One Day at a Time, each of us looking at the same screen for thirty

uninterrupted minutes. I had a big crush on Pat Harrington
who played Snyder, but nobody, myself included, knew. 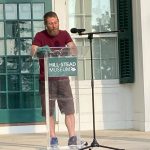