I never told you about the time I met you in a dream. I recognized you, even though you were not wearing your favorite trilby on your finely manicured head and were trying to advance unnoticed down the narrow aisle of a speeding train. We were nearing Shanghai. At least that is what the signs said, the ones we could read, which popped up every now then, after miles of passing large green-and-white signs we did not understand, even if they predicted the hour and day of our demise. You said you were not expecting to see me on this train, but on the one coming back. How did you know that I was going to be in Shanghai? I asked. It is not a subject we have ever discussed in all our years of doing business. We didn’t have to, you said. It is written all over your face. You have never been able to wash those tears away, no matter how many times you have tried.

I do not remember many of my dreams, hardly any, in fact, less than a handful,
most likely because they don’t want to be trapped here, in a world pierced
by sunlight’s crimson shards.

I keep thinking that I should meet a living poet in a dream, perhaps my good friend who lives in Singapore or the one whose books I have been reading from cover to cover (there are more of these than you might think), but I keep encountering poets who have died, some who left just a few days or weeks ago, no matter where I am transported: Hollywood movie set or abandoned beehive redesigned as a library, rubble strewn parking lot in Ecuador or leafy forest trail in Wales. It seems that these poets feel that they did not get enough attention during their lifetime; and they have decided to lurk around in dreams, hoping to alter the future of their afterlife in the world they left behind.

I met my grandfather, who excelled at water maintenance, only once, long after he had died alone in the old city of Hong Kong, after years of wandering to starlit domains: Bristol, New York, Hoboken, Beijing, and Shanghai. I asked him if he had any advice on how I should live my life. He smiled wanly, looked at his feet, and shook his head. No, I have no advice. He smiled again, traces of bitterness visible in his hesitations. I myself have failed at everything I ever did, he said in a soft voice: studying, marriage, civil engineering, being a father to my only child, who I left before he could say goodbye.
In fact, I even flopped rather badly as a grandfather, which is why we have not met until now.

Did you get the poem I sent you, you asked, incredulous that I had not read it and could not make any comment–intelligent or otherwise–on its structural beauty? Really, you sneered sarcastically. Poets are all alike, you hissed through gritted teeth, but decided no further explanation was necessary. 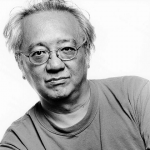