This workshop will study tension, humiliation, and fear. Strangers, static, sirens. When to slow down and when to speed up. Intimacy/chaos. Everyday anxieties. Cracks in reality. Chemicals in the water. A troubling two-minute dream that plays all night on loop. Oil leaks, nuclear waste. The man watching us over his newspaper. The child bitten by a baboon spider. Students will be locked in bathrooms, dropped from helicopters, left in mazes. Ignored, lied to. Interrogated, abandoned.

AFTER WE HAVE SEX

why am I seeing a young boy feeding his bird?
the beak pecking the soft skin on his hand 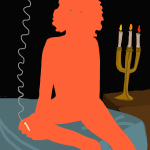 Rachel B. Glaser is the author of the novel Paulina & Fran, the short story collection Pee On Water, and the poetry books MOODS and HAIRDO.