epaulettes that come off
to make room for a swarm

of flies. With the desire to paint
a truck yellow.

Squeezed and scared and with
a cap and I’m smoking.

the face with your fingers and palms.
Holiness cleanses.

Stables are lined with wood, not with
frescoes. Frescoes chide a horse’s

rump. In one square centimeter
of the pontoon, I put Siberia,

a firefly, and another firefly.
They all floated.

O, if a bee stings in the mouth!
The sky eats sweets.

The cold pushes away horsehair.
Victory floats away,

with creased heads. Serenity
grazes with a bloody mouth.

In Pompeii they grew squash.
Lumberjacks watered it.

This is an icy branch,
you drank from the trees.

The sun doesn’t have the width of a human leg,
Michael wants me to write

a journal. Your sky is labial,
sprinkled with black gnats.

Bits of legs are planed by
a red brick. By sails.

You don’t say. You don’t participate.
The train goes. The train puffs.

speck, I’ll hear it.
Einaudi will

lend me teeth. The zone is Trieste.
The rain is from Kočevje. Do you

remember? The shadow of a bear, not
the bear itself. He lifted

clay. He lifted a hut.
Candles and books stood

to the left and the right of the bed.
At night he picked

apples from the orchard. That’s why
I could call you.

WHAT I BELIEVE AND WHAT THEY DON'T USE

The cheetah is damp. Salt flats are God.
Check if the carriages are low.

Motion is mother’s cell. I’m coming to
the country with grass. Lambs that

a geometer put under a wheel. Pokers
buried together with gray bark.

Night is fusion. The burden is sober. Silent
and painted, licked, bald. From

the loss set by green windows. When
I pant, I don’t really pant. When

I breathe, I really breathe. They come inside
packages but keep all the caterpillar

legs inside the packages. Cream is flowery
and it glistens. I intend to extinguish the tree. 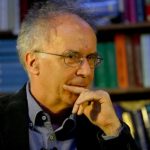 Tomaž Šalamun was a Slovenian poet who was a leading figure of postwar neo-avant-garde poetry in Central Europe and an internationally acclaimed absurdist. 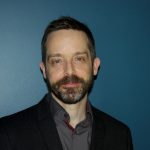 Brian Henry has published multiple books of poetry, including edited collections and translations. His most recent book is Permanent State (Threadsuns Press, 2020).

The last decade of Tomaž Šalamun’s life was astonishingly productive. Between 2004 and 2014, he published a dozen books, including a 900-page volume of new and selected poems, and he wrote another nine books that have been published since his death in December 2014. Šalamun wrote the poems in this issue between 2004 and 2011, and they appeared in books in Slovenia in 2014 and (posthumously) in 2015 and 2018.

The poems in this issue are characteristic of his primary mode during this time: each poem consists of seven couplets, clearly gesturing toward the sonnet, but more as a lyric space than as a poetic form. A lot happens in this space as the poet warps time and syntax, undoing conventional understandings of how things—thoughts, memories, actions, images, people, objects, animals—connect. The ruptures usually occur between sentences, but they can arise within a sentence, as when “serenity grazes with a bloody mouth.”

Despite their disjunctiveness and surrealistic logic, these later poems can actually be easier to translate than Šalamun’s earlier work, which often made statements and expressed particular ideas while also being disjunctive and surrealistic, requiring the translator to convey specific meanings as well as the poems’ stylistic innovations and idiosyncrasies. The biggest challenge in translating the more recent poems is creating a poem in English as sonically compelling as the original while navigating Šalamun’s penchant for experimentation.